To forge new technologies and solutions under the extreme conditions of motorsports, we will never stop innovating.

We race our cars to push ourselves to learn from the toughest challenges.

Competing on every kind of road, no matter what the challenge, inspires us to build “ever-better” cars. We’re engineering TOYOTA’s future DNA.

We’ll keep competing to bring the freedom, adventure and joy of driving to everyone.

Over the years, Toyota has been participating in many different forms of motorsport, including Formula One, the World Endurance Championship (WEC) and the Nürburgring 24 Hours endurance race. These activities were conducted by separate entities within the company, such as “Toyota Racing”, “Lexus Racing” and “GAZOO Racing”.

Of those, “GAZOO Racing” in particular first entered the Nürburgring 24 Hours race in 2007 with two used Altezzas, supported by a team of mechanics that comprised employees selected from various departments within Toyota, under the belief that “the roads build the people, and the people build the cars”.

This was very much in line with the thinking of Toyota’s founder, Kiichiro Toyoda, who said already in 1952: “Car racing is more than just entertainment. It is vital to the development of the Japanese passenger vehicle industry. Just as athletes test their capabilities by competing with all their strength in the Olympics, automakers use racing as an opportunity to push a vehicle’s performance to the limits and compete for supremacy, enabling them to discover new ways of advancing automotive technology.”

With this in mind, in April 2015, Toyota went back to the basis and united Toyota’s motorsports activities into “TOYOTA GAZOO Racing”, placing motorsports as a fundament in its commitment to make ever-better cars. 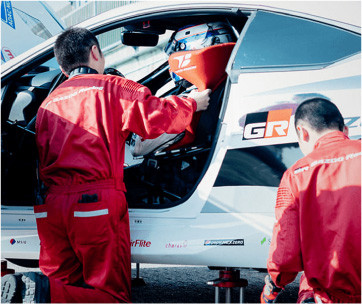 TOYOTA GAZOO Racing embodies Toyota’s commitment to overcoming every limit to make “ever-better” cars.
To forge new technologies and solutions under the extreme conditions of motorsports, we will never stop innovating. 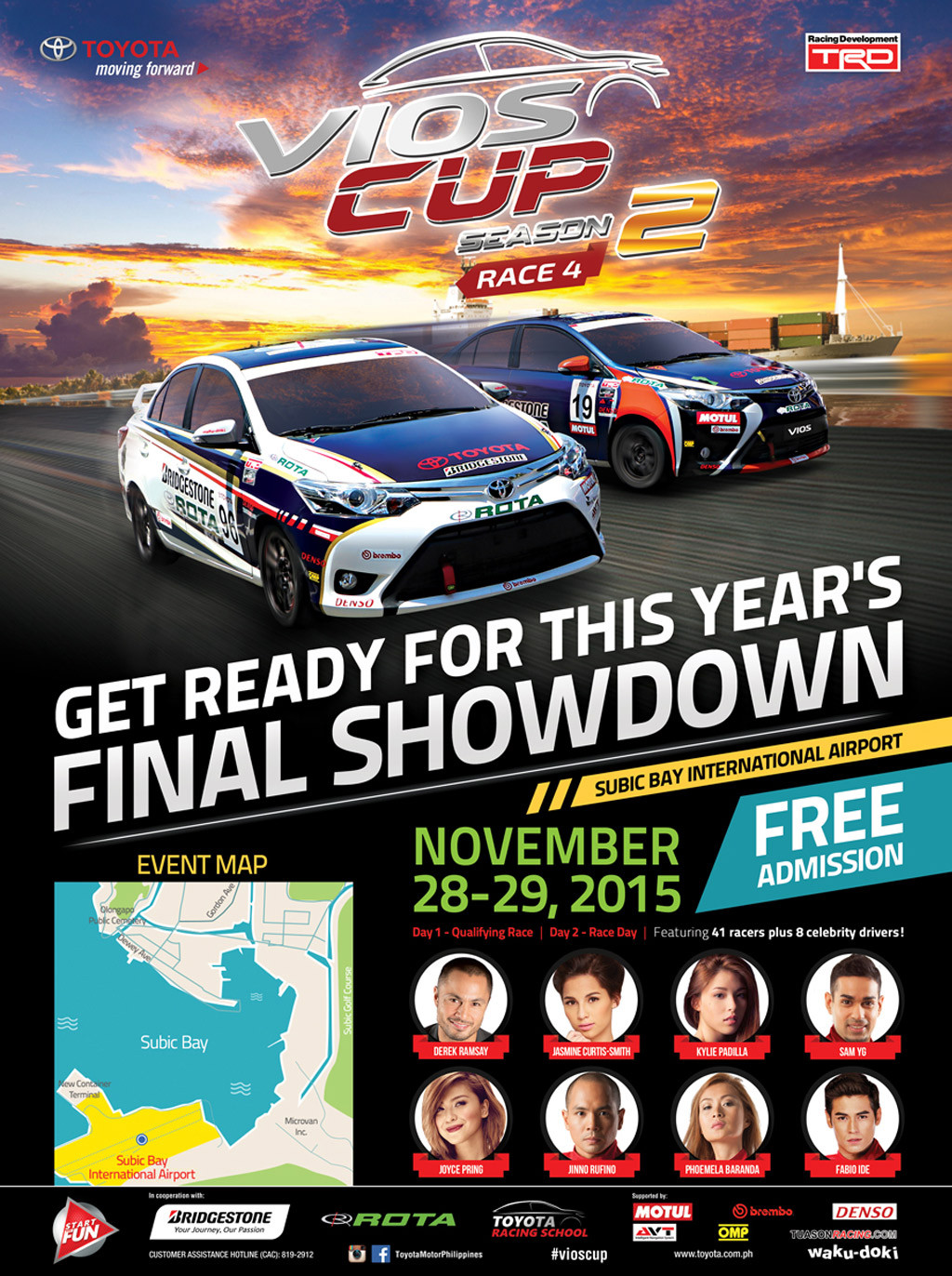 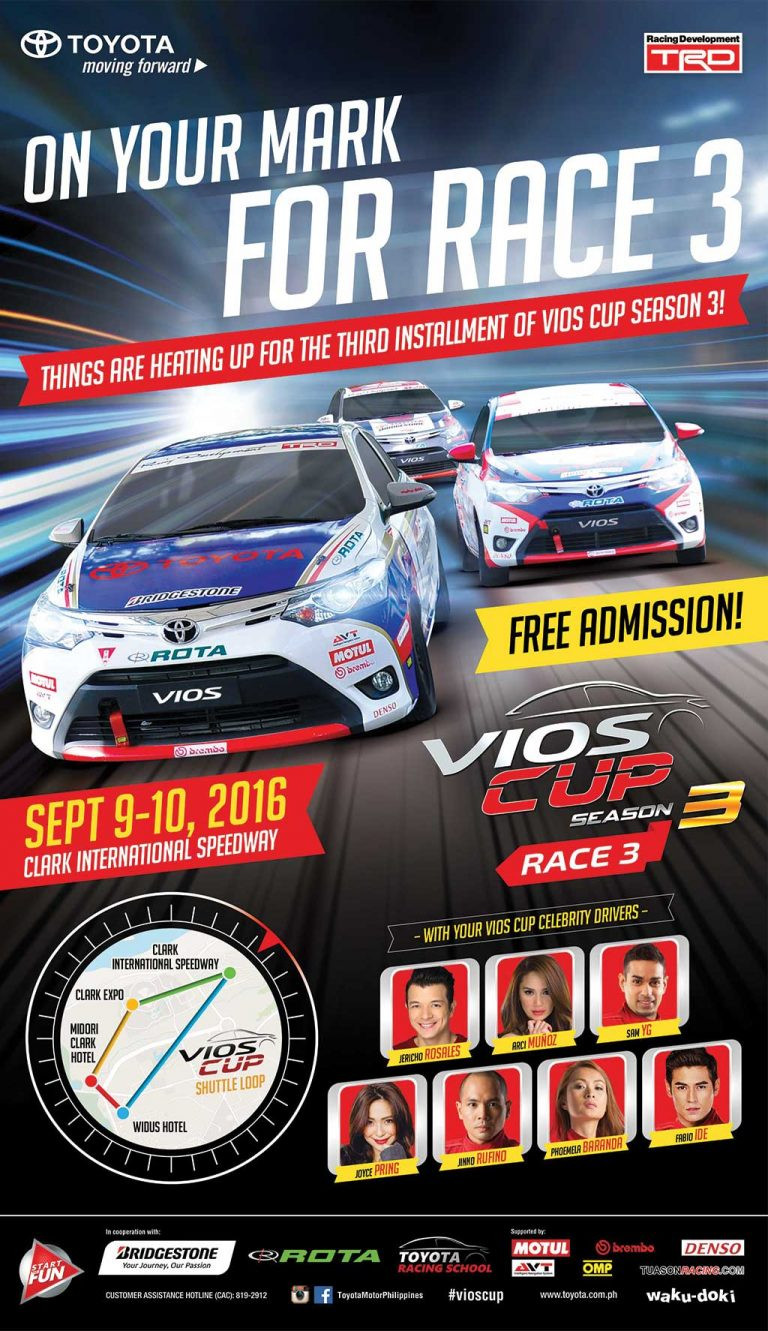 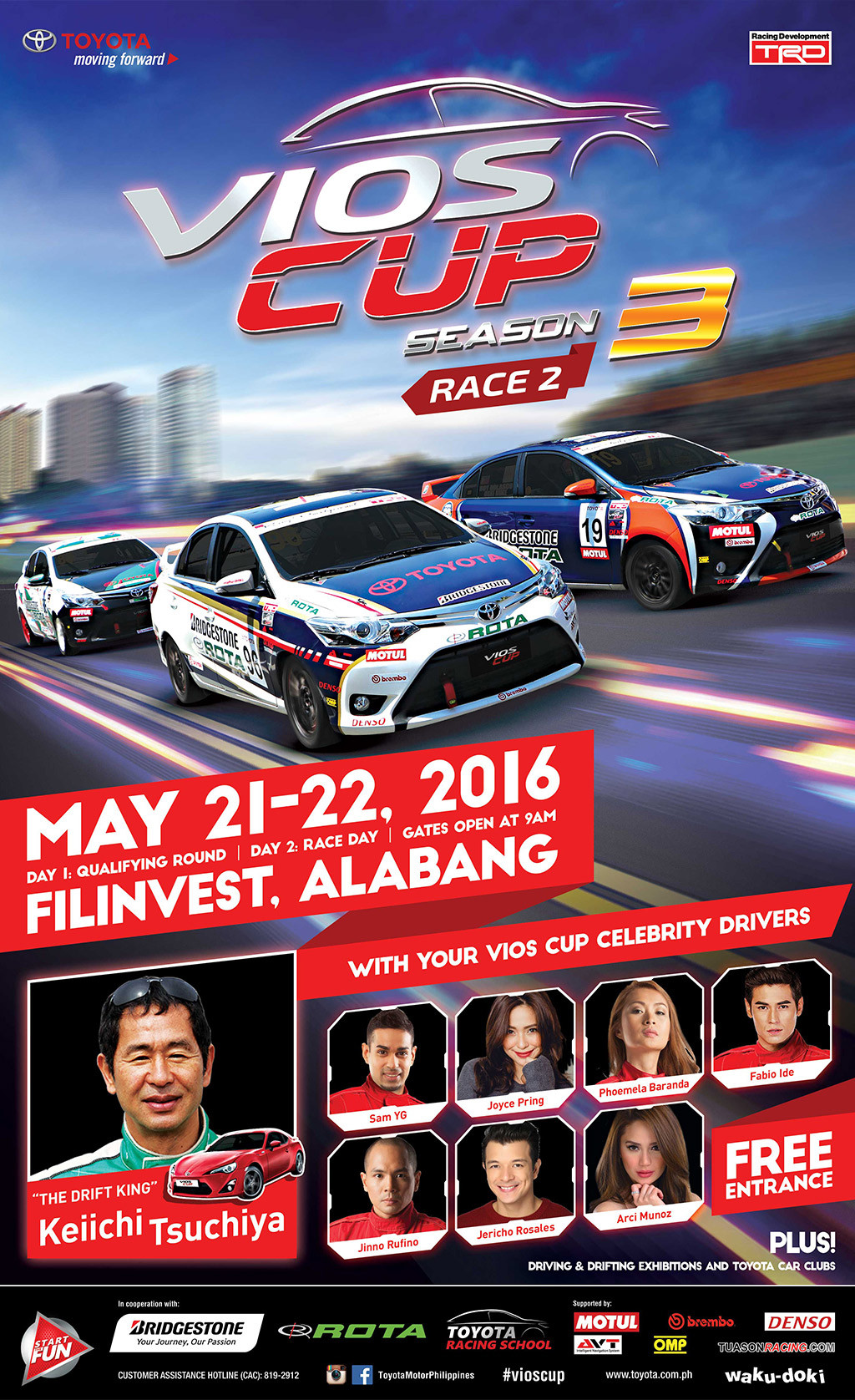 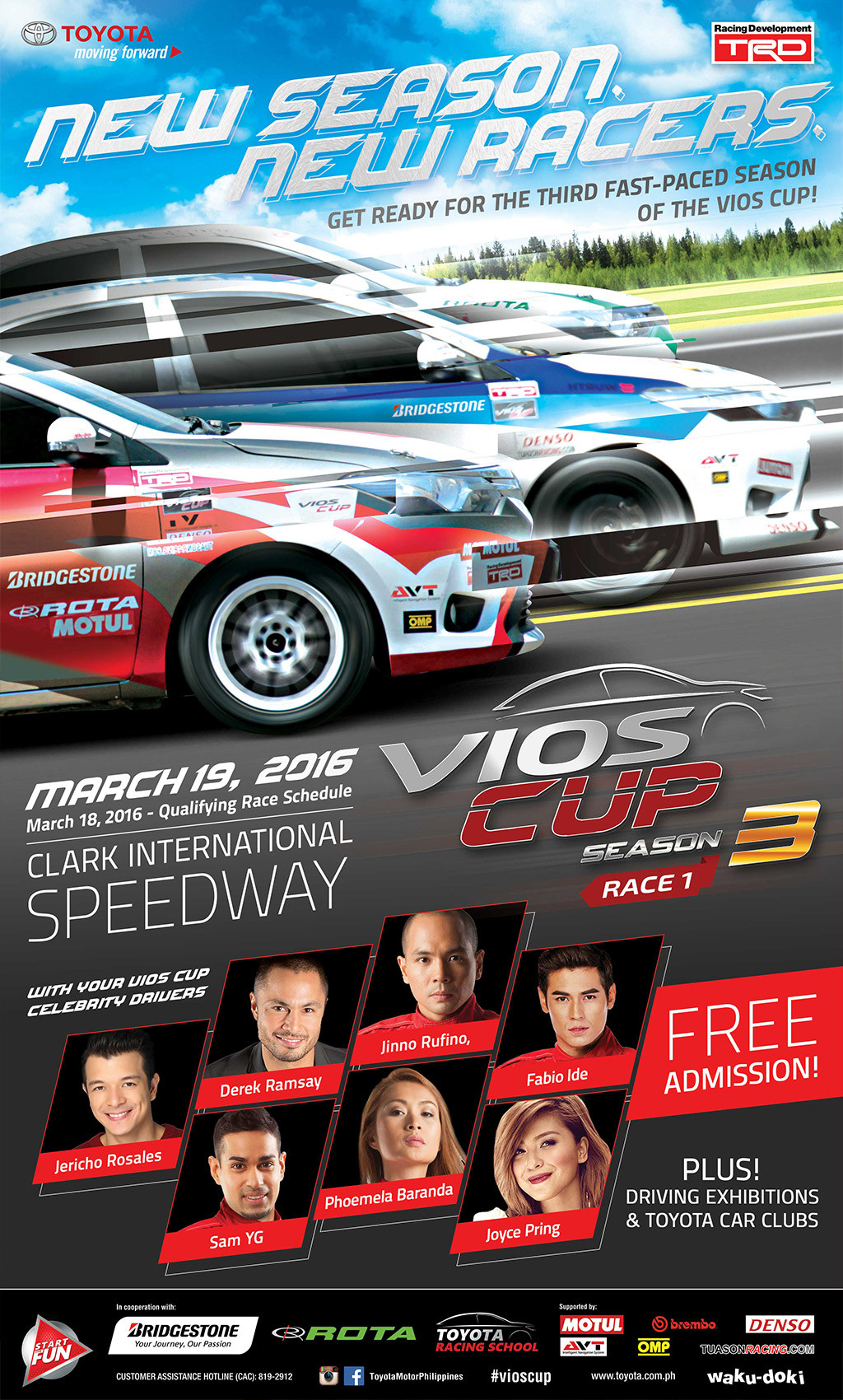 TOYOTA IS SET TO SPEARHEAD MOTORSPORTS IN THE COUNTRY

TOYOTA IS SET TO SPEARHEAD MOTORSPORTS IN THE COUNTRY

This October 2013, Toyota Motor Philippines (TMP) is set to re-enter one of the most exciting events in the motoring industry. The number 1 automotive company in the Philippines will spearhead an exciting motorsports competition dubbed as the VIOS CUP. Fun is driven into newer heights at the Clark International Speedway in Pampanga wherein gearheads and racing novices will get to experience true WAKU-DOKI. In Japanese, this is the feeling of anticipation and that adrenaline rush you get when you are about to do something exciting. This translates to fun the Waku-Doki way. The goal of which is to get everyone’s hearts racing with excitement.

The Vios Cup is a grassroots racing competition spearheaded by Toyota Motor Philippines (TMP). Catered to motorsports enthusiasts and just about anyone who enjoys the fun in driving, the Vios Cup is designed for non-professionals making it a platform for everyone. This race is bound to showcase the true meaning of Waku-Doki and highlight QDR delivered by the country’s best-selling car – The Toyota Vios.

This exhibition race in October will be composed of 12 teams. The participants are all non-professional racers such as several motoring journalists and popular celebrities such as Rhian Ramos, Phoemela Barranda, Aljur Abrenica, Fabio Ide and Jhinno Rufino.

This event will be a prelude to Toyota’s plans of engaging into motorsports starting 2014. It is open to non-professionals who are hopeful race car drivers. Aside from the race itself, the Vios Cup has a lot in store for all its visitors such as a concert starring Ely Buendia and the Oktaves, Spongecola, The Zombettes and DJ Ace Ramos. Othe activities are Toyota Car Shows, Driving Exhibitions, Car Club Track Gatherings, Kiddie activities and many more! Racing fans, Drift fanatics, Toyota enthusiasts and the like will surely enjoy this day filled with everything a petrol-head would ever imagine.

This exciting whole-day racing event scheduled on October 12 (Saturday) at the Clark International Speedway in Clarkfield, Pampanga will also be open to the public. There is no entrance fee.

THE VIOS CUP RETURNS TO MANILA

THE VIOS CUP RETURNS TO MANILA 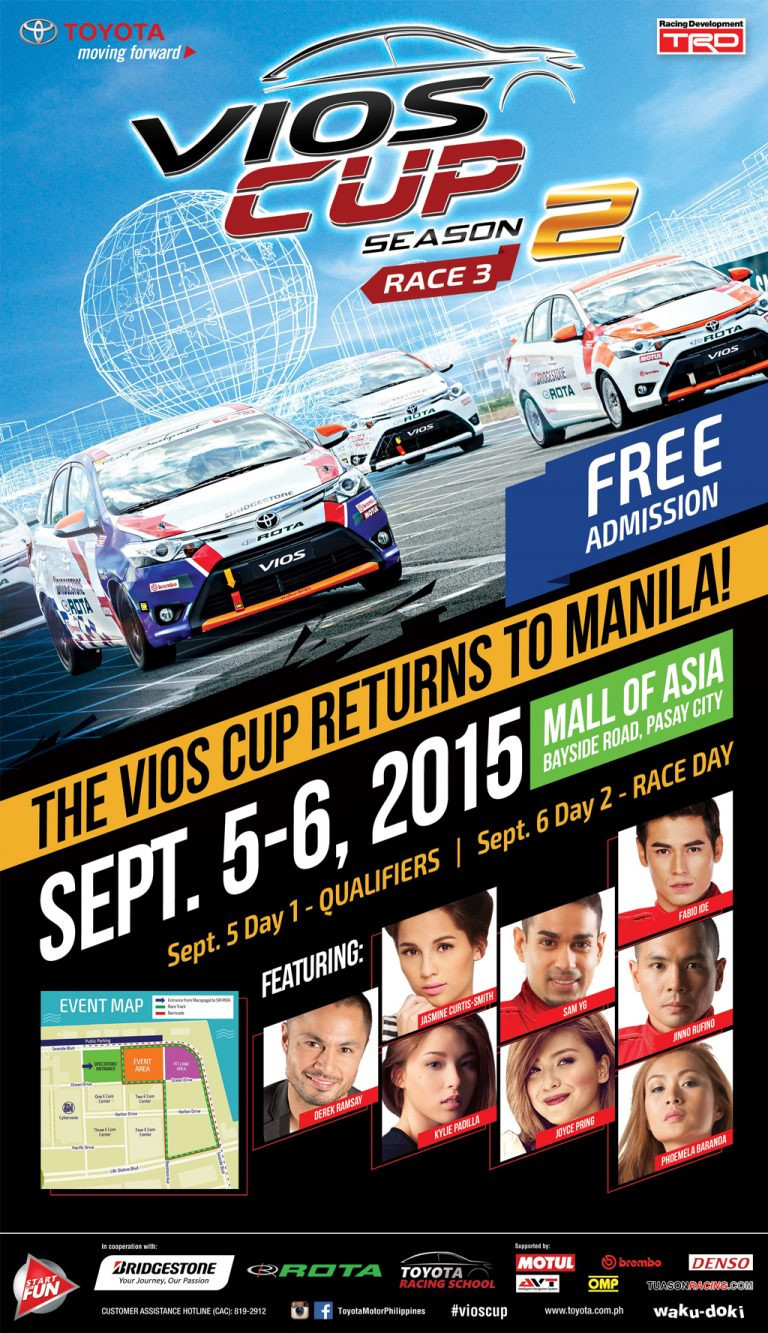